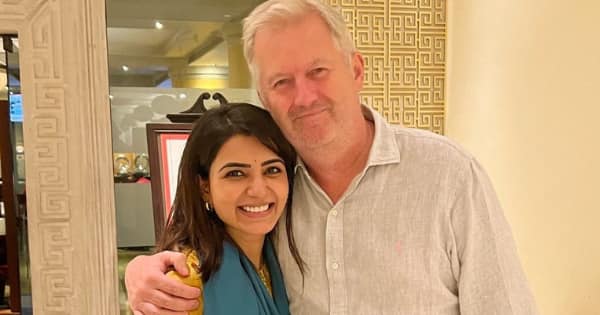 Samantha Ruth Prabhu‘s Bollywood movie debut has been the talk of the town for a while. Though the actress has featured in a few Bollywood films, fans want to see her in a meaty and lead role in a Hindi movie unlike her appearances in the previous films. Samantha has been immersing herself in work and was said to be on a signing and listening to scripts spree. And guess what? The Majili actress’ latest post will give you a major surprise. Just a couple of minutes ago, Samantha Ruth Prabhu shared a picture with BAFTA award-winning director Philip John. The actress revealed that she auditioned for something and we are guessing that she’s moving to Hollywood now. The actress’ wide smile reflects her joy in the picture. She expressed her joy in words in the caption which read, “A whole new world…..I last auditioned in 2009 for Ye Maya chesave. 12 years later, and auditioning again, I felt the very same nervousness…. I guess it’s not everyday you get to audition for a BAFTA award winning, critically acclaimed, director of your most favourite series ‘Downton Abbey’ Jumping for joy that you picked me sir #PhilipJohn .. Thankyou @sunitha.tati @gurufilms1 for the opportunity.. cant wait to start this exciting journey !!”

Now, for those not in the know, the movie is an adaptation of the best selling novel The Arrangements of Love. Whether it is an Indian adaptation or a Hollywood movie is yet not confirmed. However, the hashtag Sam Goes Global on Guru Films’ Instagram announcement post is a major hint. “It is with immense pleasure, we would like to welcome @samantharuthprabhuoffl on board the film adaptation of best selling novel, Arrangements of Love! #PhilipJohn @timmurari @nimmi.harasgama @sunitha.tati @gurufilms1 #SamGoesGlobal #ArrangementsOfLove,” the post read. Check it out below: