The trailer of one of the most awaited films of 2023, Shehzada, starring Kartik Aaryan was unveiled today in a grand fashion. Since it’s a massy entertainer, the trailer launch was held at Mumbai’s Gaiety-Galaxy cinema, popularly known as the G7 multiplex. Fans were also invited and their hooting and clapping enhanced the impact. What also helped was that the trailer was well-cut and thoroughly entertaining. 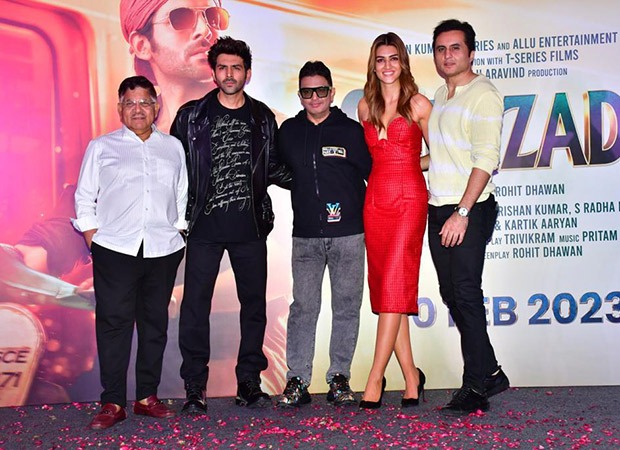 Kartik Aaryan’s last theatrical release was Bhool Bhulaiyaa 2 (2022), which was a blockbuster. Immediately, after watching the trailer, several netizens began discussing whether Shehzada can cross the Rs. 185.92 crores lifetime collection of the horror comedy and whether it’ll emerge as Kartik Aaryan’s first Rs. 200 crores film.

Shehzada Trailer Launch: Bhushan Kumar is SUPREMELY confident of the box office prospects of the Kartik Aaryan starrer: “I feel that we will be able to break the record of Bhool Bhulaiyaa 2”

When Kartik Aaryan was asked about it, he replied, “Fingers crossed. I hope Shehzada does more (than Bhool Bhulaiyaa 2). The industry needs it. This is a massy family entertainer. It is intended to be seen with your families or in large groups in theatres. We hope ki aap alag-alag logon ke saath yeh film baar baar dekhne aaye.”

Producer Bhushan Kumar, however, seemed supremely confident about Shehzada. He said, “Definitely Shehzada record tod paayegi. This is a bigger family entertainer than Bhool Bhulaiyaa 2. Thanks to Drishyam 2 (success), we have realized that people are loving family entertainers more. And Shehzada has all elements (that work with this target audience) – family, action, music, comedy etc. Hence, I feel that we will be able to break the record of Bhool Bhulaiyaa 2 with (Shezada).”