The Kapil Sharma Show, that has been tickling the ribs of audiences ever since its inception, has seen a multitude of stars gracing the couch to promote their film. With some of the biggest celebrities attending the show and showering their love on Kapil Sharma and other comedy artists, the recent episode was all about celebrating the fun kind of cinema – comedy films. As a part of the comedy directors’ special episode, attending the show was none other than filmmakers like Satish Kaushik and the Bhool Bhulaiyaa 2 director Anees Bazmee, Masti director Indra Kumar among others. And taking the opportunity, Kaushik also launched his forthcoming film Kaagaz 2 on the show. 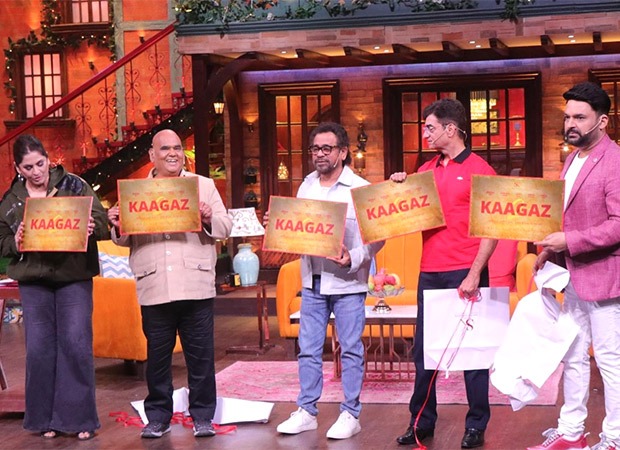 The Kapil Sharma Show: Satish Kaushik unveils the logo of his film Kaagaz 2 with Anees Bazmee and Indra Kumar

Talking about Kaagaz 2, the film is the second part of the Kaagaz franchise and tells the story of a common man fighting the system whose right to life is infringed upon by protests and rallies. The film features Anupam Kher, Darshan Kumaar, Smriti Kalra, Satish Kaushik & Neena Gupta.

Coming to The Kapil Sharma Show, it airs on Sony Entertainment Network and features an ensemble cast of actors and comedians along with the main host, Kapil Sharma.

Also Read: Kiara Advani shares how she convinced her parents to join Bollywood, it has a major connection with Aamir Khan starrer 3 Idiots